S and I have a little tradition when we play our favorite matching game. Whenever one of us turns over the bear on a bicycle card, we both do a little freak-out and holler "Bear on a Bicycle!" And of course whoever finds the match does a mini dance. I've got no idea why we do this. Maybe just because we love the illustration so much.
So when Heather Ross told me that Melissa Sweet, the illustrator of our beloved game, would be attending Heather's Weekend Sewing retreat last weekend, I did a larger version of my mini freak-out. I love Melissa's work, and she would be there in person, sewing with us! (And not only was she sewing with us, she was even making up my Lisette Passport Jacket.)
So that was fun. But what we even more fun was learning that Melissa has just published a new children's book, Balloons Over Broadway, which is a story about the man who made the very first balloons for the Macy's Thanksgiving Day parade. 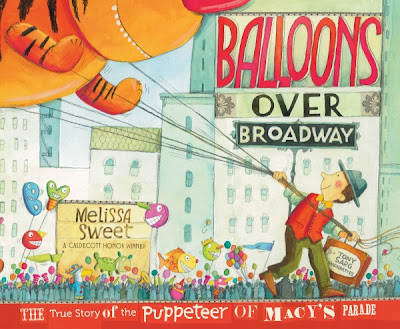 As it happens, we were having dinner just around the corner from Macy's one night during the workshop, so a few of us dropped in afterwards to see if we could find the poster and the Macy's shopping bags (!) featuring Melissa's illustrations. 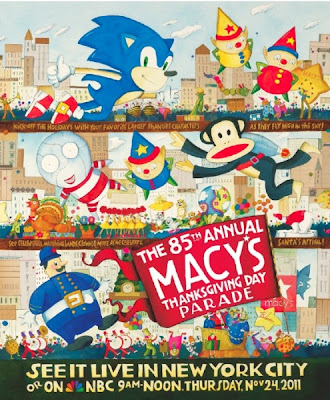 It wasn't an entirely fruitful search. No sign of the shopping bags, but we located a poster before returning to the sewing lab for the evening. I'll go back in a week or so to see if I can find the shopping bags.
S was beyond thrilled to get a signed copy of the book, and she spent yesterday afternoon and evening (parent-teacher conferences--half day of school) happily working away on the fantastic activity pages that Melissa and her publisher assembled. They're amazing! S spent loads of time designing her own Thanksgiving Day balloon, assembling a balloon hat (it turns out she moves quite well like a balloon when she's wearing her hat, thank you very much), and finding the best parade route through the maze. She was busy taping together the finger puppets while I assembled the adorable finger puppet storage box (I'll be making another one for myself, I love it so much). The activities are brilliant and would be a wonderful way to keep excited kids busy while they're awaiting Thanksgiving dinner. 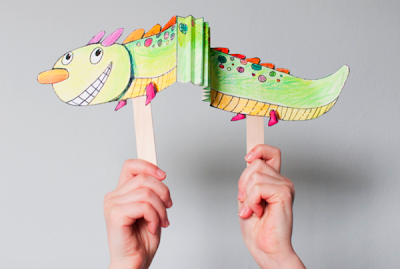 By the way, Melissa will be on The Martha Stewart Show later this week demonstrating what Heather says is "the best project" she's seen for kids in a long time. Guess what we'll be doing on Thanksgiving Day before dinner?
Sweet.
(All these images are from Melissa's website. She's got a great blog, too!)
Posted by Liesl Gibson at 12:49 AM