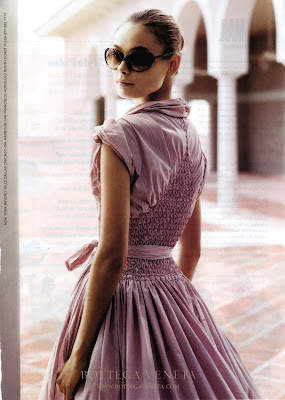 Have you seen this ad? (Click on the photos for enlargements.) I can't say I've ever paid much attention to the Bottega Veneta line (or, these days, to anyone's line--who has time?), but the spring/summer 2007 collection is simply stunning! I've always wanted to try smocking, but this dress takes smocking to a completely new realm. Who would have thought it could look so fresh and contemporary? Check out pages 8 and 40 of the on-line catalog, which I think are also smocked garments, as well as the amazing pleated jacket on pages 68 and 69. Shirring was also used as a detail in the collection.

You can see the full dress from the ad on pages 78 and 79. It's really quite sporty, made in what appears to be a cotton shirting fabric, but I think it would make an amazing wedding dress, too, if you were going a less traditional route.

Speaking of smocking, many people have been asking me about it lately. So I've been investigating a bit, and here's what I've found:

Membership with the Smocking Arts Guild of America will connect you with many active chapters and even with a web-based group. The SAGA website offers some basic smocking instructions, and you can also enroll in correspondence courses. Note especially the WeeCare program, through which smockers and sewers can learn to sew and smock while also donating their work to hospitals.

And finally, Jeannie Baumeister at The Old Fashioned Baby publishes detailed patterns for children's heirloom clothing. You can also find her patterns as well as fabric and notions for making them at this site.

And now we're off to enjoy the sunshine for the afternoon. Those skiiers will have to wait another day, even though they're making me crazy!
Posted by Liesl Gibson at 1:38 PM