When Todd is doing preparation for a tour for the Whitney Museum he soaks up all sorts of details and lets the information marinate for a while. Occasionally a few juicy bits spill out, which inevitably makes me curious to see the show and to hear what he'll say about it. In the end, the most incredible tours usually emerge from the oven that is his brain. 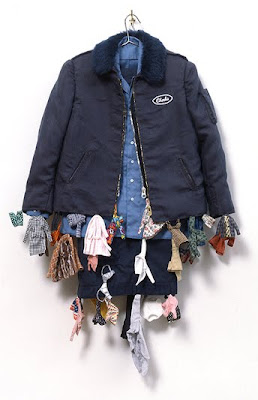 This time, however, Todd couldn't wait to share the show. He knew Tsia and I would love it, and I think you will, too. (Unfortunately, the Whitney doesn't allow photography in the galleries, so I'll just have to tell you about it and show you some photos from the website. But you need to know up front that photos don't do this work justice.

Charles LeDray makes tiny things. I'm not going to attempt a proper art review because other people are much better at it and more erudite than I will ever be. But I can tell you that, from the perspective of someone who sews and who knows garment construction and pattern making really well, his work is incredible.

This has, of course, become a running joke at our house. Here is a typical morning conversation:

You get the picture. 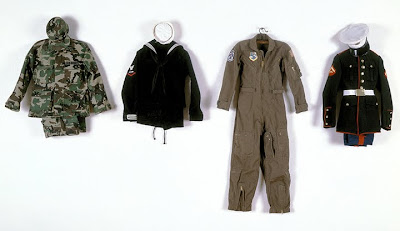 So I really can't tell you much about the artist's process. Nor, I imagine, can many people. But I'm guessing that LeDray procures clothing and then takes it apart, paying particular attention to the construction of the garment. Then he probably makes a pattern from the disassembled garment, reduces the scale considerably (he says each item is "exactly the size it needs to be," and the pieces are each a different size but all seem to be smaller than 50% of the original garment), recuts the pattern, and assembles the garment exactly as the original was constructed. No kidding. I closely examined a miniature trench coat hanging from a miniature coat rack and could see that the edges of the inside facings were finished with Hong Kong binding, and the free-hanging lining was hemmed to exactly the right length.

Each piece also appears to be worn. I've got no idea how he does this. It's possible to "age" clothing artificially, like putting "whiskers" on bluejeans--you know, the white lines that result from wearing a pair of jeans for a long time? The aging on LeDray's miniature clothing is much more subtle and gives the appearance that a body actually occupied the garment and gave it a shape that contours the body.

Some of the miniature garments even have miniature garments attached to them. My favorite is a small wooden hanger with pants, shirt, jacket and tie. From each garment holes have been cut. If you look closely, you can see the hole in the front of the shirt that is a perfect extra-miniature shirt sleeve. An even smaller pants, shirt, jacket and tie, have been constructed from the missing pieces, and this extra-miniature clothing hangs from the first miniature. Both are impeccably detailed. 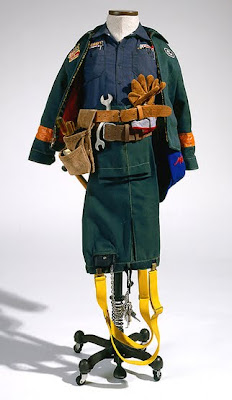 But the most mind-boggling part of the show is the last gallery, where he has constructed miniature scenes. Little clothing racks filled with shirts or jackets, tables stacked with old T-shirts or neckties on display, laundry bags and baskets overflowing (with perfectly made laundry, or did he give himself a break and stuff the bags with bunches of fabric? Please, Mr. LeDray, tell me it's just fabric or I'll faint from sheer exhaustion for you!). Each item was made by LeDray: the racks themselves, the stacks of clothing, the aged linoleum tiles, even the dropped ceilings with fluorescent lighting and the dust that lightly covers each item. Once you've seen the attention given to just one of these garments in the preceding galleries, the effect of all this together is simply overwhelming.

LeDray does all the work himself, and he is prolific. Not only does he meticulously construct all those tiny garments. He also makes hundreds of tiny ceramics and constructs miniature furniture out of human bones. I'll admit, the ceramics and the use of human bones left me a bit cold, but the garments more than made up for it. And the detail on the non-textile work is just as meticulous as the textile work, so the overall effect of the show is sublime. I don't use that word lightly.

Really. If you get a chance to see it, please do. I'm guessing you'll be stunned. 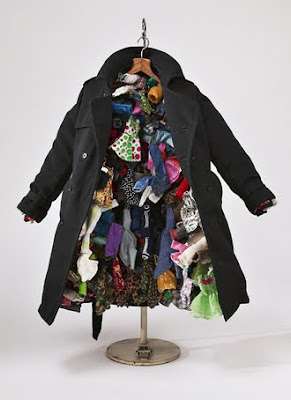 P.S. I was noting to Todd, as I was finishing this post, that most of LeDray's work features men's wear:

Todd: The men's clothing conceals smaller dresses and women's clothing.
Me: Is there a message in that?
Todd: What do you think?