something in the genes

No kidding, we measured Tsia the other day and she's grown an inch in the last two months! So this dress hem is just basted (and rather sloppily, at that) because there's an extra three inches in there, just waiting to be let out.

Ok, so let's just preface this post by saying that the love of pink or of sparkles was not genetically handed down through me or Todd. Or not directly, anyway. It didn't manifest itself in Tsia until preschool when she started playing with other girls who love pink, so maybe it's a passing fancy? I can only hope so, but a sparkly princess dress has been frequently and strongly requested, so Mom and I got busy during my visit home during the holidays. I thought I might get away with a more sophisticated selection of fabric, and I had almost successfully placed a lavender and gold sari-printed satin in our shopping cart when Tsia revolted. She wanted the pink with sparkles. And not just one pink fabric with sparkles; both the dress and the sheer accent fabrics needed to match! Yikes. 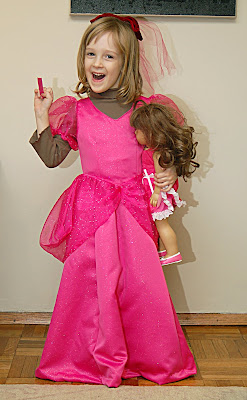 We used a McCall's pattern that I can't seem to find online, but it was in the pattern book the other day so I know it's still in print. There were about 18 views, which made the sewing seem more complicated than it actually was. I did make some adjustments to the bodice since I could tell from the measurement chart (and the photo on the envelope) that it would be too wide on her. Then I did the cutting, pressing and pinning, and Mom did almost all the sewing so it went really quickly. We returned home a few days later with a nearly finished dress; it just needed to be hemmed.

That, of course, took me another two weeks.

Mom found a matching veil in her stash of dress-up clothing for grandchildren (I love that she has this--we all got dressed up one night and had a blast!). And now what a happy kid we have, prancing around in her princess dress!

But here is the funny part, the part that makes my simultaneously proud and cringe. Turns out there was a vision for the pink dress. It wasn't just about any pink dress. She wanted a pink dress like her doll's! I get it, the designer vision thing. She's got the dress, she's happy, and I feel better for letting her have her way.

Thanks, Mom. That over-skirt construction was really weird, but it totally worked out.
Posted by Liesl Gibson at 8:59 PM