I wasn't planning to show you these, but they fit the theme perfectly. 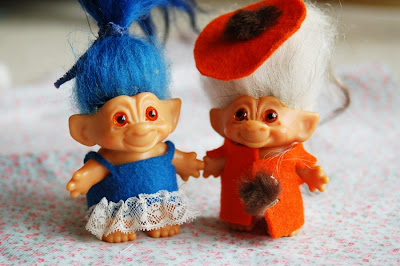 Apparently troll dolls were very popular in the 1960's, a little before my siblings and cousins and I arrived on the scene. But my aunt was the right age for them. She and a friend made all these little clothes for their troll dolls using Grandma's scraps. I think the dolls and their wardrobes must have been a favorite Grandma's House toy for all of us. Personally, I spent hours dressing them and re-dressing them with my sister. 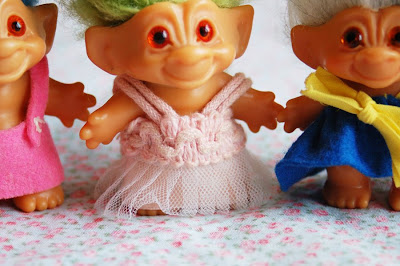 The clothes are amazing. Grandma didn't know how clever they are until just the other day when S and I were making some repairs to the decades of Grandkid Damage that has accumulated. They're made mostly from felt, but you'll see some fur, French lace, and fashion fabrics mixed in there as well. Some of the outfits have hook-and-eye closures, others have buttons or snaps, and some have no closures at all. I've already found inspiration from several of them.

Rather than bombard you and the blog with troll photos, I'll just send you over the the Flickr set if you want to see more. I've added some notes to the photos that detail my limited knowledge of them.

Postscript: Ok, a quick Flickr search found this. I had no idea there was a sewing pattern for troll clothes! Love Flickr.