I sense a collection developing

I made several finds at thrift shops and antique stores while we were away, and this apron is among my favorites. Salvation Army, just $1 or $2, I forget exactly how much. It makes me feel a little bit sad that it was there. I mean, someone clearly spent hours stitching it, and then somewhere down the line it was discarded. I suspect that whoever donated it didn't appreciate the time and effort involved in making such a lovely item. 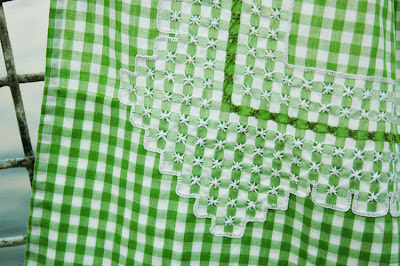 I showed it to Grandma a day or two after I purchased it, and she said it's among the best examples of chickenscratch she's ever seen. We both marvelled over the buttonhole stitching around the chickenscratch: it makes the stitched area look almost like a lace overlay. 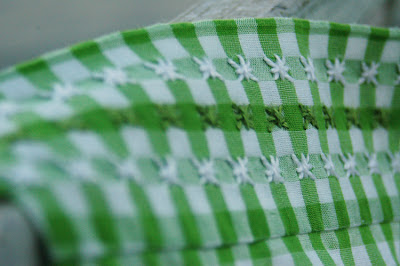 It's funny; I seem to be accumulating quite a stash of chickenscratch patterns and samples. A friend of Grandma's passed along some books on the topic when she learned how much I loved apron #1. I'm not sure why I like the technique so much. Maybe it's just the fact that you can alter gingham in such interesting ways with a simple variation on the cross stitch. I spent loads of time making cross stitch when I was younger and haven't really retained any interest in it, but applying the technique to something else? Yes, please. 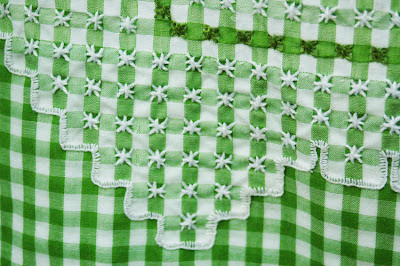 Or maybe I like chickenscratch it's because I love gingham so much. I love the grid-ness of it, and I like how it coordinates with other fabrics. I also appreciate that it's not such a distinctly feminine fabric. Or at least it doesn't seem overtly feminine to me. Yes, it has a certain kitschy, 50's Italian restaurant, candle-in-the-wine-bottle tablecloth vibe, but there's something equally contemporary about it that appeals to me despite (or maybe in addition to) the retro aspect. 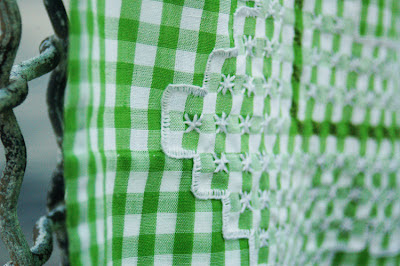 My own daily apron-wearing extends almost exclusively to my beloved linen bistro-style cover-all, so it's unlikely that I'll be sporting this one much. But maybe that's about to change?
Posted by Liesl Gibson at 6:38 PM