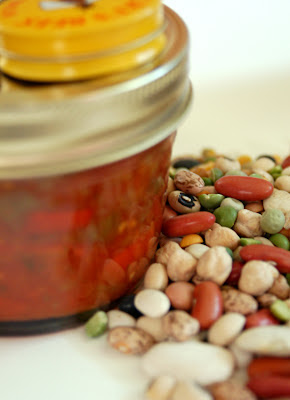 I come from a relatively large family: two parents, five daughters, three husbands/brothers-in-law, two boyfriends, and four grandchildren. And it's been a struggle to find a Christmas gift-giving strategy that works for everyone. For a while we tried exchanging names, but it can be really difficult to shop for someone when you see him or her only once or twice a year. We tried making Christmas lists to help each other, but shopping for someone using a list they provided feels a bit too impersonal.

Then there was a year or two where we agreed to only donate money to a non-profit organization rather than give each other gifts. Two problems there: we had a terrible time agreeing on a cause that met every one's requirements, and several people within the family (maybe most of us, I'm not sure) felt that the holiday spirit was lost if we didn't exchange something. Sometimes it really is fun to give a gift to the people you love.

But we seem to have reached a compromise. Most of us continue to donate money somewhere, but I credit my sister Sharri for starting what I think has become a gift-giving tradition within the family. For the past two years she has assembled a collection of items, and each family member or household receives the same package with the same items. Each member of her household contributes one item to that package. This year her husband, Bob, contributed a jar of his home-made salsa ("Uncle Bob's Organic Farm Salsa") made with ingredients from their farm co-op membership. Sharri contributed a favorite bean soup recipe and the bean mix for the soup. My four-year-old nephew contributed a lip balm he discovered when his pre-school went on a field trip. And my two-year-old niece contributed a hand-painted glass Christmas ornament.

This care package idea works especially well for my sister because her husband also has four married siblings, many of whom also have children. I can't imagine buying gifts for all those people on both sides of the family, and this seems like a brilliant solution.

And what, you ask, is so great about receiving a jar of salsa and a bag of beans for Christmas? It's the accompanying letter/description of each gift! In it, each item is described, attributed to the giver, and given a little background. Also included: lots of humor. I'm going to quote a couple of sections, particularly the footnotes, from this year's letter.

Introduction to the letter:

"Here it is, our second annual [family] Christmas Care Package. Every item has special significance to us and will hopefully be useful(1) to you when treated with proper care(2).

footnote (1)"Items are considered "useful" when used with caution and good judgement, when kept away from open flames, and while not under the influence of controlled substances (including but not limited to remotes, tempers, air traffic and pantyhose).

footnote (2) "Care instructions are included for each item. When in doubt, wash in cold water as needed, gentle cycle. Hang dry. Cool iron when necessary."

"Sharri's contribution: Rocky Hill (nonorganic - sorry) Bean Soup Recipe and Mix(3): Our church used to sell mixed beans and this recipe as a fundraiser at its Christmas bazaar. They haven't done the bazaar for several years, but we still love making this soup around Christmas time. If you serve a big ham on Christmas Day (that's tradition, for reasons I don't know), use the leftovers for scalloped potatoes (call if you need a recipe) and then use the bone and last ham pieces for this soup. Sounds like a Holiday Time-Saving Strategy straight from Real Simple, n'est pas?

footnote (3) "Closely follow washing instructions on bean packaging. Sender is not responsible for small stones that resemble beans, if found (can you believe the bean packaging calls this a "helpful hint" instead of "warning"?). Helpful hint: consider dental insurance."

Personally, I think the letters are hilarious and make the package fun and personal. 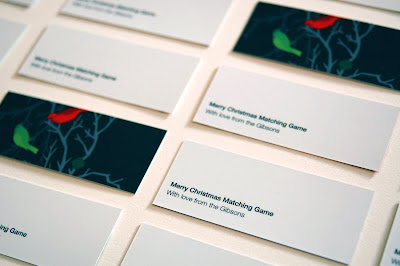 So what was in the care package we mailed this year? I don't think it was nearly as fun as Sharri's, but here is one item of which I am rather proud. Only our nieces and nephews (and some friends of the Kiddo) received this gift, since it's really for children:

You've seen the nifty Moo cards from Flickr? They're adorable little gems, and the quality of the printing is fantastic, especially for the price. I had a brainstorm one day that these custom cards would make a great personalized matching game (Todd says it's called Concentration): select 25 images, and when the cards are printed you'll have two sets of fifty cards, or 25 pairs. Keep one set; give the other to a friend. The game can be made as simple or complex as desired by adding or subtracting pairs of cards. 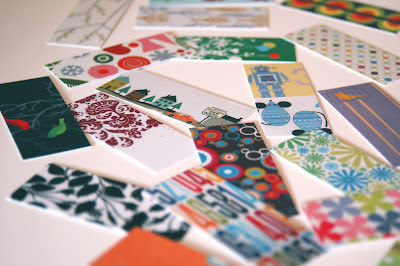 Ideally I would have used portraits of all the Kiddo's friends and family for the card images. But time was tight (have I told you how much I dislike the holiday rush?), so instead I went to Print and Pattern and downloaded some attractive, holiday-inspired images. (Full disclosure: this is probably not terribly legal or fair since I used other artists' presumably copyright-protected artwork. I'm hoping it won't upset anyone since the cards were made for personal use and are not being sold or distributed widely. All the same, I don't condone the practice. Use your own artwork!)

Email ThisBlogThis!Share to TwitterShare to FacebookShare to Pinterest
Labels: holidays