Who do you imagine drives this bicycle? 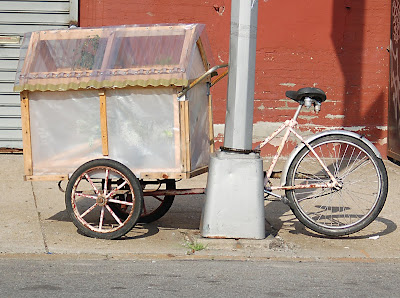 I've been hoping to catch a glimpse of its rider for many months now. Early last spring the portable greenhouse was planted with a variety of little seedlings. I could hardly wait to see what sprouted. But I was even more interested to see who built and maintained such a fascinating three-wheeled contraption. Obviously this person is very creative, innovative, and not afraid to be just a little bit different. He or she must also be in excellent shape, since this doesn't look like a lightweight bicycle frame. Not to mention the additional weight of carting several milk jugs full of soil. 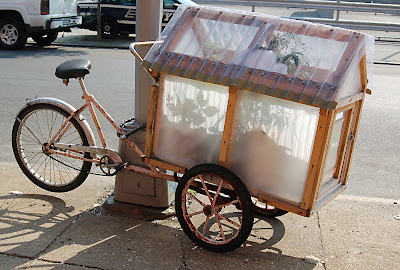 Sadly, I have yet to catch a glimpse of the owner. I keep watching on my way to and from the studio every day, but I've never seen anyone tending the garden or the bike. 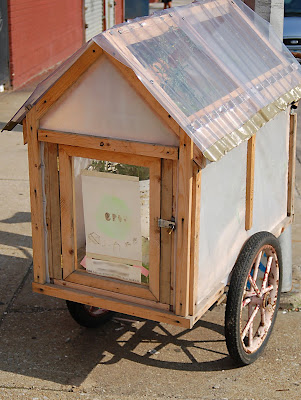 (In my imagination, a young man with a funny straw hat wakes early on Saturday mornings and pedals his pink tricycle to the green market to sell basil (since that appears to be the current crop). He leaves at 4:00 am because he needs to get over the Williamsburg Bridge in time to greet his early-morning customers. They like their basil to be as fresh as possible, so he harvests as needed. After business has been conducted, he trades a few basil stems with another vendor in exchange for some ripe tomatoes and begins the long trek back home.)

P.S. Those little plants must be hardy ones. Not only do they appear to travel; they've also endured some extremely warm temperatures during the past few weeks. I can't imagine what the temperature must have been inside that little greenhouse during those sunny afternoons.
Posted by Liesl Gibson at 9:18 PM