I like to make my own greeting cards, and since we have a rather large family I've been economizing lately and making an edition of birthday cards each year. Last year everyone got a card with stripes painted on it in watercolor. This year I made collage cupcakes for everyone. Now that the year is nearly over and almost everyone has received their card I don't think I'm giving anything away by posting a photo of one: 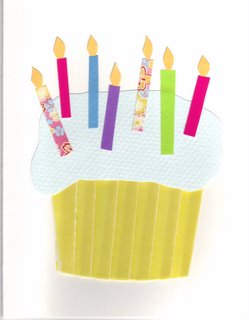 I haven't yet decided what the 2006 birthday card will be, but I recently came across this little blurb and photo in Harper's Bazaar and thought it was a clever idea. Dear Yves. He always uses the word "love" in his New Year's cards. Not that I'll be making cards that have love all over them, but I like the idea of a consistent theme from one year to the next. Then the recipient could collect a complete edition of the cards, and the cards might be even more meaningful as a group.